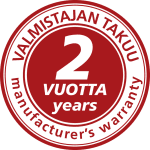 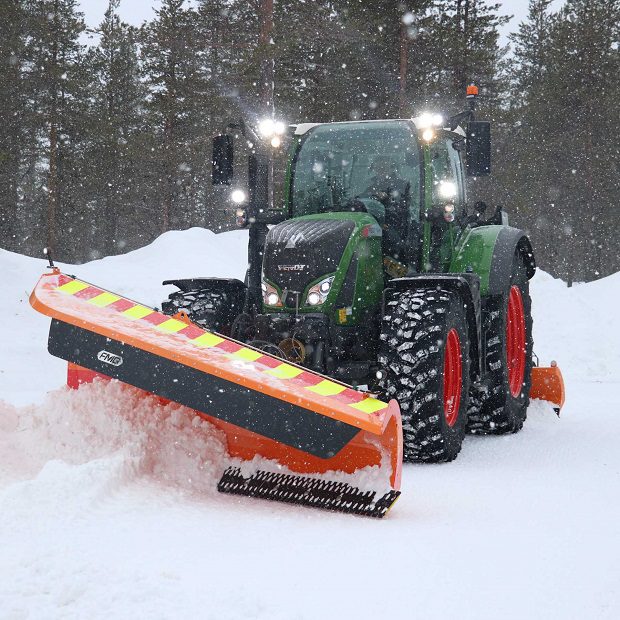 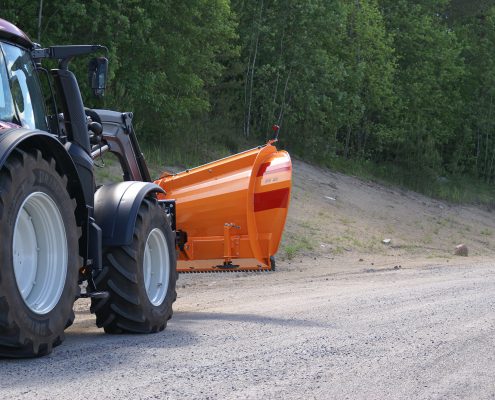 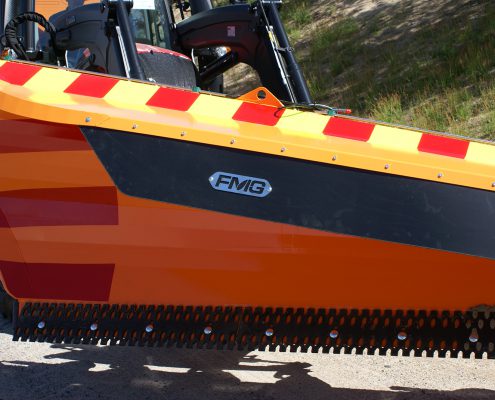 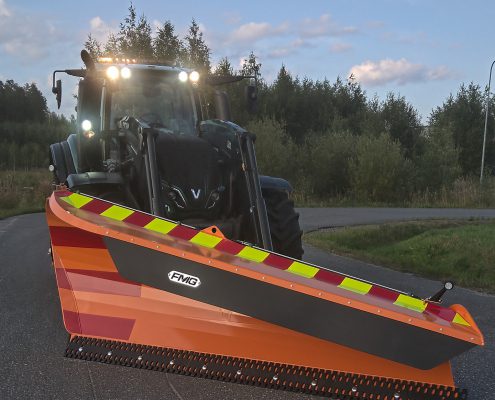 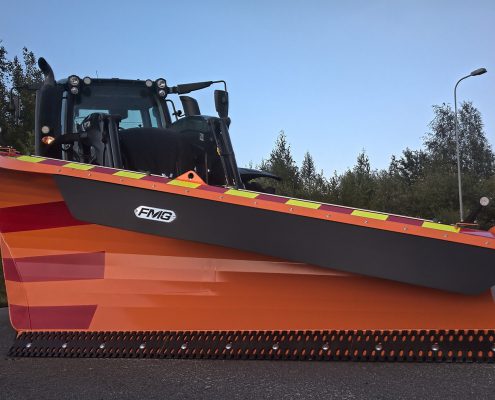 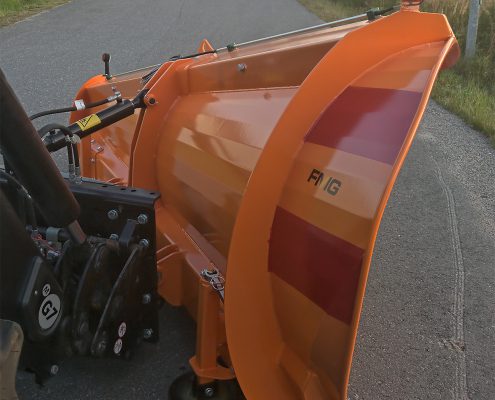 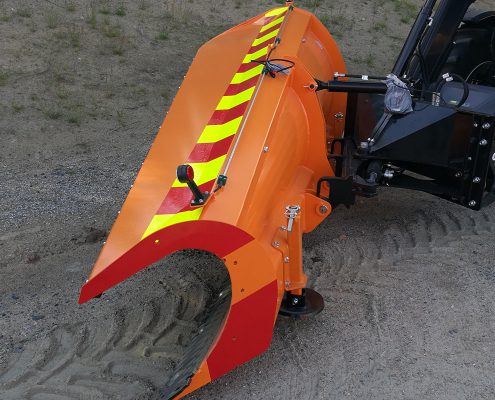 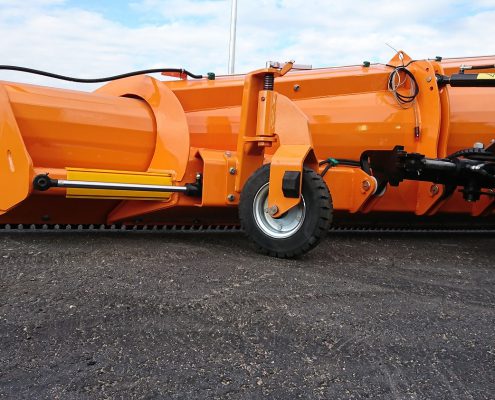 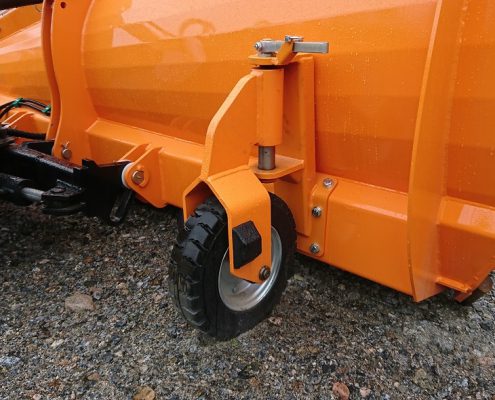 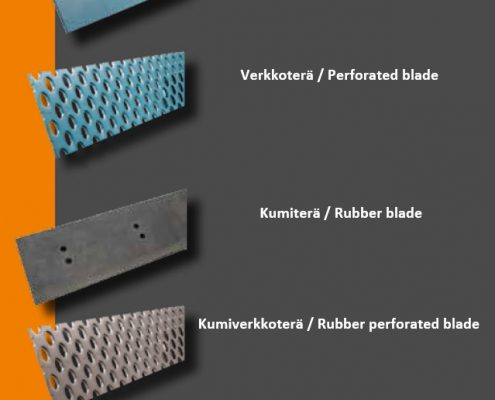 multipurpose diagonal plough for snow cleaning from the roads and streets

FMG’s areal ploughs have been fully redesigned based on customer needs and test results over many years. FMG’s areal and zoom ploughs are suitable for clearing snow from roads and streets, as well as from yards and terminals. The design offers excellent snow throwing abilities at speeds as low as 15-20 km/h.

The snow plouw shoes can now be replaced with wheels, making it possible to adjust the blade just above the surface of the road and in this way conserve the blade and shoes. This feature is really useful when ploughing in the early winter or on asphalt roads.

The upper wing on the of FMG areal ploughs is angled horizontally forward, which allows the driving wind to clean the wing and helps throw the snow up onto the road bank. In addition, the  vizier on top of upper wing prevents snow from blowing onto the bonnet and windscreen.

The hydraulic suspension acts like a shock absorber, effectively damping vibration from the road surface. In case of an obstacle, the cylinder piston goes forward together with the accumulator, and the correction back is performed easily with the basic hydraulics.

The wing and supports are sturdy, as is the body of the blade, which has been designed for heavy usage, such as cleaning forest roads. Despite the higher weight, the ploughs are easy to handle due to a short plough body and a centre of gravity close to the adapter. Due to their optimal blade angle and wing curvature, the ploughs are also easy to push, which benefits fuel consumption.

Floating the wing is controlled by the floating bar between the wing and the plough body. The wing itself is jointed with three lubricated and locked pins, and there are six plastic bearings for lateral movement. Plastic bearings help reduce wear and efficiently damp the drive noise of the plough. Turning the wing is controlled by two hydraulic cylinders with a diameter 80 mm, which enables stepless turning of 0 to 45 degrees to the right-hand side.

FMG’s popular areal snow plough is joined by a zoom model, which is equipped with hydraulically operated extension wings. The working width can be increased or decreased on the run with a maximum extension of 0.5 m. Zoom ploughs are ideal for roads with varying widths of narrow bridges, for example, where bigger models are not practical. Zoom ploughs are easy to operate using the joystick on the tractor’s armrest.

Scroll the table to see it completely

FMG is a developer and provider of high quality municipal and road maintenance equipment for Nordic, Baltic and Ukrainian areas.

This site uses cookies. By continuing to browse the site, you are agreeing to our use of cookies.

We may request cookies to be set on your device. We use cookies to let us know when you visit our websites, how you interact with us, to enrich your user experience, and to customize your relationship with our website.

Click on the different category headings to find out more. You can also change some of your preferences. Note that blocking some types of cookies may impact your experience on our websites and the services we are able to offer.

These cookies are strictly necessary to provide you with services available through our website and to use some of its features.

Because these cookies are strictly necessary to deliver the website, refusing them will have impact how our site functions. You always can block or delete cookies by changing your browser settings and force blocking all cookies on this website. But this will always prompt you to accept/refuse cookies when revisiting our site.

We fully respect if you want to refuse cookies but to avoid asking you again and again kindly allow us to store a cookie for that. You are free to opt out any time or opt in for other cookies to get a better experience. If you refuse cookies we will remove all set cookies in our domain.

We provide you with a list of stored cookies on your computer in our domain so you can check what we stored. Due to security reasons we are not able to show or modify cookies from other domains. You can check these in your browser security settings.

We also use different external services like Google Webfonts, Google Maps, and external Video providers. Since these providers may collect personal data like your IP address we allow you to block them here. Please be aware that this might heavily reduce the functionality and appearance of our site. Changes will take effect once you reload the page.

Please wait while you are redirected to the right page...